In the history of good political system and governance, only an hypocrite will dispute the regime of GADAFFI of Lybia. He succeeded in his ruling because he was a military that used the law of the Quran. Free or affordable houses, standard medical attention, enough food for both indigenous habitants of Lybia. All these are no where to be found in the worldly organised system of government. Knowing this, the enemies of islam found it as obstacle against their aim to abolish islam and planed against GADAFFI.

However, He GADAFFI learnt his system of government from the best of mankind, prophet Muhammad pbuh. This is because He pbuh was sent to the whole of mankind, jinns and the animals and he decreed justice and emulated government. Allah says: “Certainly, We have brought them a Book (the Quran) which We have explained in detail with knowledge, – guidance, and a mercy to a people who believe.”
*Quran 7:52*

It is sentiment that differ the world government from the true legacy of Muhammad pbuh system of government.

Mercy is that ethereal quality that embodies gentleness, piety, care, consideration, love, and forgiveness.  When these qualities are observable in this world, they are a mere reflection of God’s mercy towards His creation.  God said clearly that Prophet Muhammad, may the mercy and blessings of God be upon him, was a mercy for all of creation, not just his family and friends or the Arab nation, or the people of the 7thcentury CE, and not for human beings alone.

“And We have sent you O Muhammad not but as a mercy for all of humankind, jinn, and all that exists.”
Quran 21:107

The traditions of Prophet Muhammad remind us that humankind was put on this earth to be the custodian of God’s creation.  Treating animals with kindness and mercy is just one of the responsibilities embedded in that custodianship.  Prophet Muhammad’s words and behaviour make it clear that causing defenceless creatures pain and suffering is not only completely unacceptable, but we will also be answerable to God for such actions.

We read in the narration book of An-nisai…

“If someone kills a sparrow for sport, the sparrow will cry out on the Day of Judgment, “O Lord!  That person killed me in vain!  He did not kill me for any useful purpose.”

The Prophet, may the mercy and blessings of God be upon him, said, “Whoever kills a sparrow or anything bigger than that without a just cause, God will hold him accountable on the Day of Judgment.”  The listeners asked, “O Messenger of God, what is a just cause?”  He replied, “That he will kill it to eat, not simply to chop off its head and then throw it away.” Ibid.

I found this on net…

This article was first published by Global Research in November 2014. Today Libya as a Nation State has been destroyed by US-NATO.

What do you think of when you hear the name Colonel Gaddafi? Tyrant? Dictator? Terrorist? Well, a national citizen of Libya may disagree but we want you to decide.

For 41 years until his demise in October 2011, Muammar Gaddafi did some truly amazing things for his country and repeatedly tried to unite and empower the whole of Africa.

So despite what you’ve heard on the radio, seen in the media or on the TV, Gaddafi did some powerful things that are not characteristic of a “vicious dictator” as portrayed by the western media.

1. In Libya a home is considered a natural human right

In Gaddafi’s Green Book it states: ”The house is a basic need of both the individual and the family, therefore it should not be owned by others”. Gaddafi’s Green Book is the formal leader’s political philosophy, it was first published in 1975 and was intended reading for all Libyans even being included in the national curriculum.

2. Education and medical treatment were all free

Under Gaddafi, Libya could boast one of the best healthcare services in the Middle East and Africa.  Also if a Libyan citizen could not access the desired educational course or correct medical treatment in Libya they were funded to go abroad.

The largest irrigation system in the world also known as the great manmade river was designed to make water readily available to all Libyan’s across the entire country. It was funded by the Gaddafi government and it said that Gaddafi himself called it ”the eighth wonder of the world”. 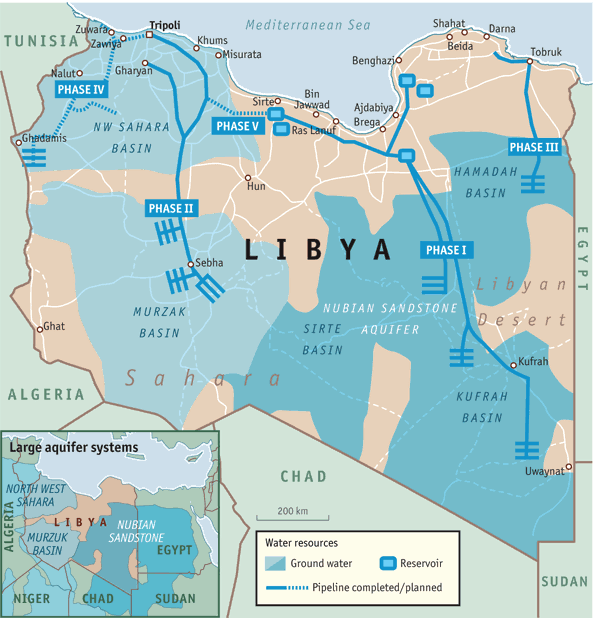 4. It was free to start a farming business

If any Libyan wanted to start a farm they were given a house, farm land and live stock and seeds all free of charge.

5. A bursary was given to mothers with newborn babies

When a Libyan woman gave birth she was given 5000 (US dollars) for herself and the child.

Electricity was free in Libya meaning absolutely no electric bills!

During Gaddafi’s reign the price of petrol in Libya was as low as 0.14 (US dollars) per litre.

8. Gaddafi raised the level of education

Before Gaddafi only 25% of Libyans were literate. This figure was brought up to 87% with 25% earning university degrees.

9. Libya had It’s own state bank

Libya had its own State bank, which provided loans to citizens at zero percent interest by law and they had no external debt.

Before the fall of Tripoli and his untimely demise, Gaddafi was trying to introduce a single African currency linked to gold. Following in the foot steps of the late great pioneer Marcus Garvey who first coined the term ”United States of Africa”. Gaddafi wanted to introduce and only trade in the African gold Dinar  – a move which would have thrown the world economy into chaos.

The Dinar was widely opposed by the ‘elite’ of today’s society and who could blame them. African nations would have finally had the power to bring itself out of debt and poverty and only trade in this precious commodity. They would have been able to finally say ‘no’ to external exploitation and charge whatever they felt suitable for precious resources. It has been said that the gold Dinar was the real reason for the NATO led rebellion, in a bid to oust the outspoken leader.

So, was Muammar Gaddafi a Terrorist?

Few can answer this question fairly, but if anyone can, it’s a Libyan citizen who has lived under his reign? Whatever the case, it seems rather apparent that he did some positive things for his country despite the infamous notoriety surrounding his name. And that’s something you should try to remember when judging in future.

Register with us it is FREE